Experience Beyond the Classroom

Douglas Finishing is all about the machines of today, but is also excited to support the mechanical enthusiasts of the future. As part of promoting Science, Technology, Engineering and Mathematics (STEM), Douglas Finishing donated anodizing and powder coating services to two high school robotics teams. The two teams visited Douglas in May of 2019 to demonstrate their robots and wow employees with their accumulated mechatronics skills. With all these elements together in one place, our largest conference room at Douglas was buzzing with the sound of moving robotic machines and the chatter of excited onlookers. The robots picked up balls and discs and placed them in target receptacles. Each robot was directed with the help of an operator through a video feed. 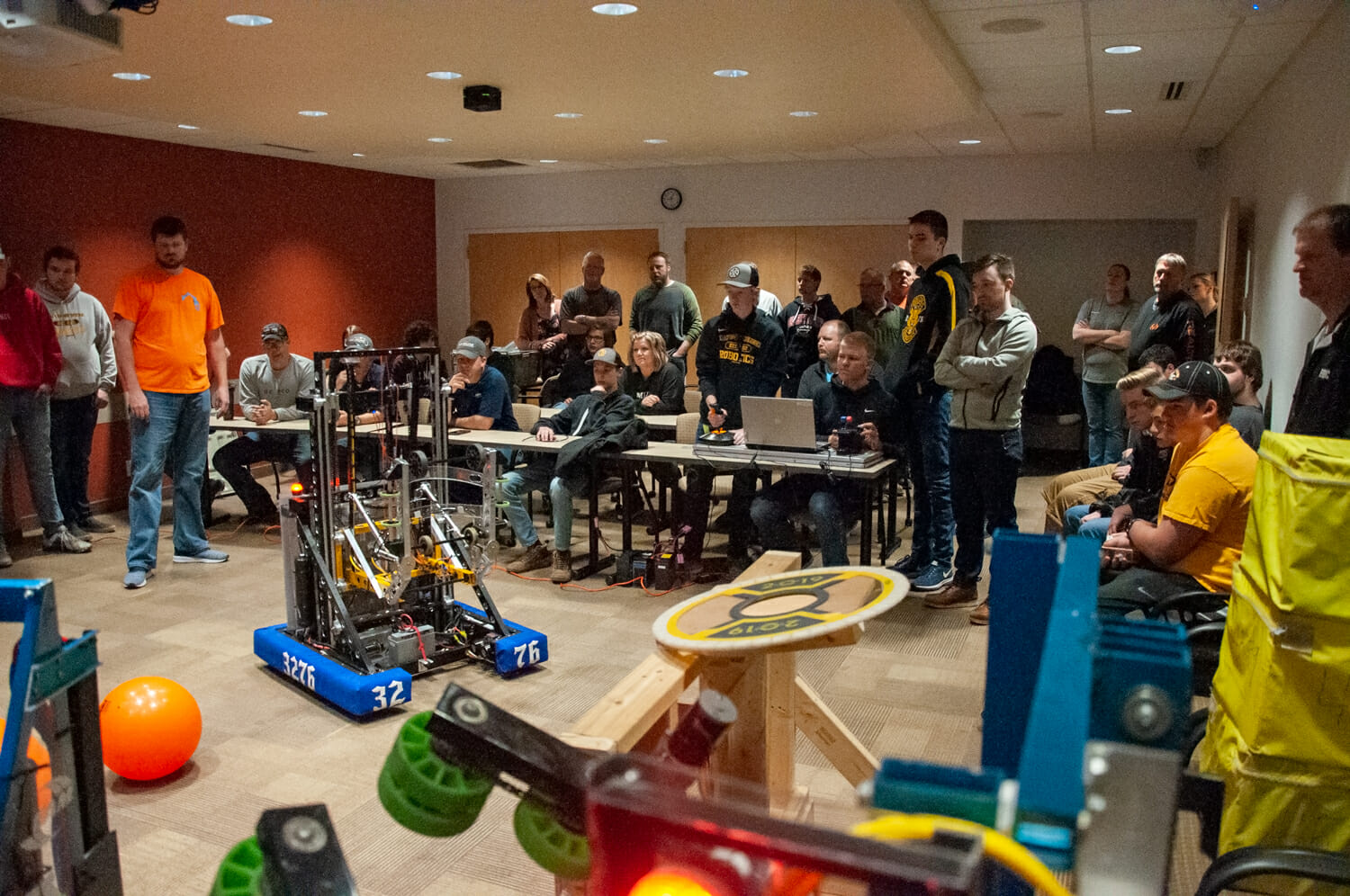 Mike Eye, Director of Douglas Finishing, explained how Douglas Finishing helped the teams out. “Douglas Finishing has donated finishing services to the robotics teams for the last couple of years. We invited the two teams to come and show us their robots in action. When looking at the finish on the robots, the blue parts are blue-anodized and the black and yellow ones are powder coat on aluminum.”

A technology instructor at one of the schools described the effort behind the sport. “The kids start with a working problem: The question they ask is what are we going to do to solve in this problem? They think through the whole engineering cycle and work their way back. The kids will then go through the process to build the robot – fabrication, automation, drafting. It takes weeks to build a prototype. The kids test it, break it, and then go and compete. It’s a costly process, so fundraising is a must for us.”

Preparing for competitions takes a good portion of the year. “You register for a competition in the fall. There will be about 63-65 teams at these local competitions. You learn the game by the end of January and you have six weeks to design, build, program and test the robot.” After six weeks when the machine is ready, it is mothballed until competition time, without access to tinker any further. “There are nine different weeks of competitions. You compete with all teams in a round-robin format. You randomly get paired with teams and you play three robots versus two robots. There are eight to eleven qualifying rounds. The top eight ranked team captains choose two robots to be on your team. The number one captain gets to pick a robot. This continues to the eight captain, then the eighth captain picks again and descends to the first captain. It’s single elimination, best two out of three.”

The instructor emphasized the reason for reaching out to local communities and businesses goes further than the double-digit costs associated with the competitions; it is about the future of the participants. He said, “Getting closer to businesses is a great benefit to the kids. Having Douglas Finishing and Douglas Machine be so gracious to say ‘Come on up – we’ll support your robot’ is fantastic. Bringing the kids here to tour their facilities would be my goal. Educating our kids is what this is about.” 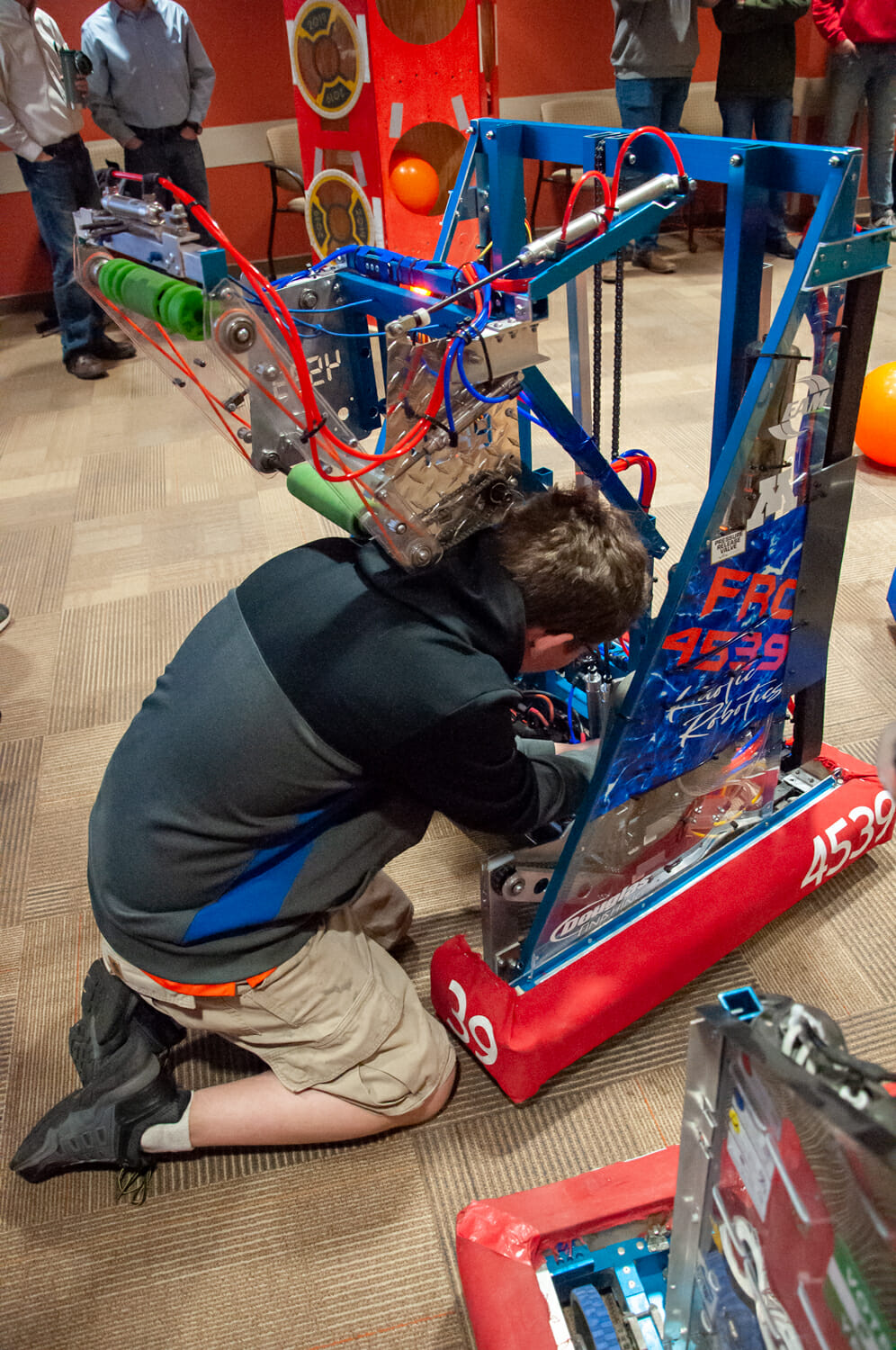 That is something Eye agreed with. Douglas Finishing is proud to be a partner in the two robotics teams’ endeavors. “It’s a great group and we’re just happy to help them out any way we can.”

Even though competition results are not guaranteed, the instructor said people do take note of the excellence of the robots. “At many competitions, we’ve received the Quality Award for the appearance and the quality of our robot machines. That’s due to Douglas Finishing completing the look with their finishing services for us. It really helps us to stand out among the crowd.” Overall, the teams have done well over the years. “We have been involved in competitions since 2013 and every year we have made it to the state championship. There are over 200 teams in the state. The top 36 teams make it to the state championship and we have always been in the top 20.” This year was no different. One of the teams went on to win the Minnesota State Robotics Championship! It is their second consecutive title. Douglas Finishing and Douglas Machine are extremely proud of the team!